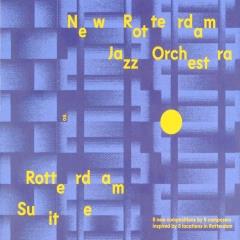 So we have this band of musical brothers. If you want to join this band, you need to be a composer, bandleader, soloist and nice person too. It is difficult to keep such a big group of characters together, but everybody enjoys each other’s (musical) company so much that we will play for decades to come, for as far as I can see now.

We wrote a suite about Rotterdam, and I was asked to dedicate a composition to something typical Rotterdam. I chose the Surinam society in Rotterdam, including it’s beautiful, tasteful and musical influences. My composition is based on a traditional Kaseko-groove (which I love!), and it’s called Oso (home). I enjoyed it a lot to work on this suite together, because of its musical variety, the challenge to play the  many complicated parts, the unity in the band and last but not least: The great response I get on Oso many times by Surinam people when played live!