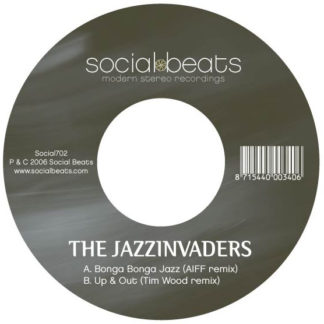 This was my first contribution as a writer and soloist to the Jazzinvaders, a collaboration initiated by Dutch drummer/DJ Phil Martin (Timothy van der Holst) and Houdinis -alto saxophonist Rolf Delfos. In the nineties, many players with jazz or impro-related backgrounds collaborated with dance/ lounge artists to spice up each other’s ideas with their different influences. In many cases this meant a straight four-on-the-flour beat with a difficult theme and a long solo…but at least young people were dancing on your solos. Only downside and main reason to quit the band after a couple of years were the restricted possibilities on stage with the sequenced computer patterns, combined with the computer’s crash sensitivity…  I enjoyed to write and record with the band, and while looking back many of their most popular tunes were (co-) written by me: Up and out, Love and Happiness, Perugia, Square Blues, etc.

Highlights: The fun we had during the many recording sessions, a unique Japan tour, lots of airplay, and working with the great organ player dr. Lonnie Smith during the recording of our album ‘That’s what you say! It was a treat to have him in the studio and I was even invited to do a European tour with his own band, years later.