This month’s update will be mainly about my recent collaborations with some highly respected Dutch artists, and they are all about to release their album at the same time.

First of all, my dear friend Candy Dulfer will (finally!) release her new album “Together” on April 18! We had so much fun during our recording sessions, and after almost 20 years of playing together we almost become one instrument while playing. My first recording with Candy was back in 1997, for the album “For the love of you”, and I played on every album after that until today, except only one album. There’s more funny news: Most of my solos used on Candy’s records were the first take, and most of our horn parts were played while giggling around, because we always try to distract each other while recording. Again, this album is very special to me because as a musician and friend Candy means a lot to me and it always makes me happy to play and write together. We co-wrote most of the horn arrangements together with the Special Request Horns.

The second collaboration I would like to mention is the new album for one of the most successful and respected groups in the Netherlands: BLØF. Lately we found out we go back together for about 25 years, I even played with them as a special guest in Ahoy Rotterdam in 2002, and today, finally I can tell you that I am thrilled to be on their 2017 album, called ‘Aan”.

I co-wroted some of the arrangements together with Dries Bijlsma and Louk Boudesteijn, and we recorded the tracks at my studio together with Dries, who did a great job as producer. I am really looking forward to some live performances later on.

And last but not least: The ladies of soul, live at the Ziggo dome 2017!

Some people find their challenge in climbing the great wall of China while others prefer the Iron Man contest. Well, we have the Ladies of Soul: 3 hours of pumping medleys with a kick ass live band for 17.000 people with live broadcast and audio/ dvd recording, 3 days long. My upper lip looks like the Grand Canyon after those 3 days, but I wouldn’t miss it for the world. It’s just such a pleasure to see so many close musical friends back every time again, all giving it a 200%. And I am very pleased with the results of this year’s edition.

There’s much more to come, for example: right now we are recording some very nice new tracks with our friends of Di-Rect. We just finished a massive-classic-sold-out-venue-tour, filled with beautiful audiences, vodka battles on stage and naked guitar players. I love ’em, please check the activity-page on this site to see where we will be playing this month, you will love them.

Have a great day! I will be back with new updates by next month! 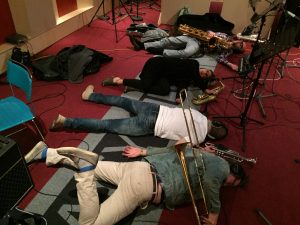